“Follovielli” are little snacks made of citrus leaves filled with sultanas and candied oranges; a specialty from Sorrento’s peninsula, also known as “follarelli” or “fogliarelli”. Prepared from November till January, tradition demands that the sultanas are boiled in wine and wrapped with the candied oranges in citrus leaves tied with raffia. Before being served the Follovielli are left in the oven to dry. The name probably derives from the latin word, “folium volvere”, that means “wrap the leaf” or from “follare” which means to “squash”, or maybe from a more uncertain “folliculus”, that means sack or shell. The recipe is very ancient, going back to Roman times, even though during those times figs, bananas or vine leaves were used instead of citrus leaves 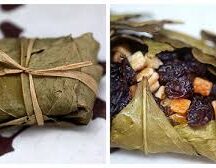